Blackmagic Design revealed the HyperDeck Studio Mini, a miniaturized professional deck that records and plays back broadcast quality 10-bit video using commonly available SD and UHS-II cards. HyperDeck Studio Mini features 6G-SDI for working with all SD, HD and Ultra HD formats up to 2160p30. HyperDeck Studio Mini is unique because it includes HDMI for monitoring, a built in sync generator and ethernet for uploading media via FTP so it also becomes an ideal solution for digital signage tasks.

HyperDeck Studio Mini is available in South Africa at Creatav from March 2017.

The world’s first miniaturized broadcast deck with non-stop recording to dual SD card recorders in all SD, HD and Ultra HD formats up to 2160p30

The advanced miniaturized design of HyperDeck Studio Mini puts the powerful features of a professional grade deck into a compact size that’s only 5.5 inches wide and 1.5 inches tall. This incredible miniaturization is made possible because HyperDeck Studio Mini records onto inexpensive, commonly available SD cards, which are a fraction of the size of SSD’s and other professional media. The design is based on the Teranex Mini form factor, making it modular so customers can mount HyperDeck Studio Mini using the optional Teranex Mini Rack Shelf and combine it with other products to create a completely customized deck based on their workflow.

For example, customers working with analog material can combine it with a Teranex Mini Analog to SDI converter on the input and a Teranex Mini SDI to Analog converter on the output to create an analog deck in a single rack space. HyperDeck Studio Mini can be used with ATEM Television Studio HD, Blackmagic Web Presenter, URSA Mini, Blackmagic MultiView 4 in any combination. This design means customers can mix and match modules to build custom solutions. 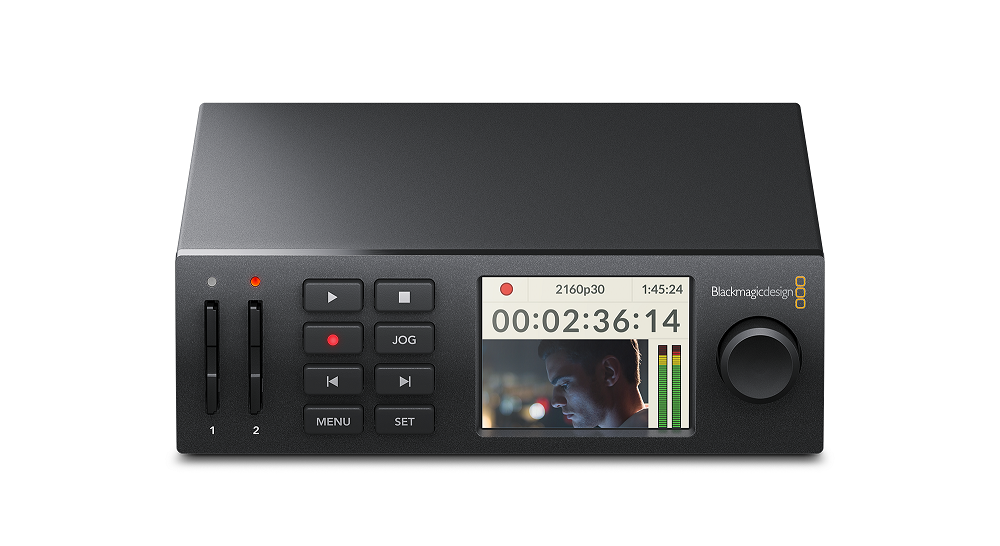 HyperDeck Studio Mini’s small size means customers can use it for ISO recording at multi camera events, as playback decks for massive multi screen digital signs, in client suites and theaters for review and approval, in post production with an editing system, or even as a fill and key source for sending animated broadcast graphics to a live production switcher. With HyperDeck Studio Mini, the combinations and possibilities are virtually endless.

HyperDeck Studio Mini features the highest quality 6G-SDI connections so it’s compatible with all SD, HD and Ultra HD equipment and formats up to 2160p30. It also includes reference input as well as a reference output with a built in sync generator, and an HDMI output for connecting to big screen televisions and projectors. The Dual Link SDI outputs can be used to output separate fill and key when operating in HD formats and playing back RGBA ProRes files that include an alpha channel. Fill and key output are designed to let customers send graphics with alpha channel out to a switcher for downstream keying over live video. HyperDeck Studio Mini also has an RS-422 connection for deck control, Ethernet for uploading files to the deck via FTP, and a built in 100V – 240V AC international power supply with standard IEC connector so it can be used anywhere in the world.

The built in reference connections and sync generator let customers connect and lock multiple HyperDeck Studio Mini’s together so they can all play back in perfect synchronization. That means customers can use HyperDeck Studio Mini to drive massive 8K, 16K or higher resolution multi screen digital signs by combining multiple HyperDeck Studio Mini’s to playback in sync on multiple Ultra HD displays. The decks can be remote controlled using the HyperDeck Ethernet control protocol and new content can even be uploaded to them via FTP. In addition, because the media files are stored locally on the SD cards, customers never have to worry about losing video playback on their digital signs if the internet connection goes down.

HyperDeck Studio Mini features traditional deck style transport controls, including a jog button and shuttle wheel. The integrated high resolution LCD shows timecode and transport information, plus a full color thumbnail preview of the current clip being recorded or played back. It also displays information about each card’s recording status, along with the video format, frame rate information and audio levels, all on the same display.

HyperDeck Studio Mini includes dual SD card recorders that work with both regular SD cards and high performance UHS-II cards. SD cards are commonly available, inexpensive and extremely reliable, which makes them perfect for use as professional broadcast video storage. Standard SD cards can be used for SD and HD video, and UHS-II cards can be used for Ultra HD. Because SD cards don’t deteriorate over time and are incredibly tiny, customers can create an entire archival library that takes up a fraction of the space required by other types of media.

Unlike traditional decks, HyperDeck Studio Mini has instant playback ballistics so customers never have to wait for video to cue. Any frame of video can be played back instantly from any card at any time. The dual recorders also allow non-stop recording, which is perfect for recording longer events. When the first card is full, recording automatically continues onto the next card. The cards are also hot swappable, so an empty card can be swapped for a full card while recording continues in the other slot.

HyperDeck Studio Mini records 10-bit YUV or 10-bit RGB video as ProRes, which is the most widely accepted professional video file format in the world. The ProRes files are compatible with software such as DaVinci Resolve, Final Cut Pro X and more, so customers can simply insert the card into a computer and start editing, all without having to convert the files. HyperDeck Studio Mini can also playback ProRes 4:4:4:4 files with an alpha channel in all formats up to 1080p60 via the SDI fill and key outputs. This allows playback of custom animated broadcast graphics to a live production switcher for keying over live video in real time.

“HyperDeck Studio Mini is a revolutionary new professional deck that’s smaller and more versatile than any other deck in the world,” said Grant Petty, CEO, Blackmagic Design. “It’s so exciting because it has the same powerful features as a full size broadcast deck, it records to incredibly small and affordable SD cards, and it has a modular design that lets customers create their own custom deck based on their needs! There is simply no other deck this small and with this many professional grade features!”