This powerful Ultra HD touchscreen HyperDeck records and plays H.265 and ProRes files in all SD, HD and Ultra HD standards up to 2160p60. Includes scopes, upgradable cache plus SDI, HDMI and analog video. Blackmagic Design Hyperdeck Extreme 4K HDR features the trusted reliability of HyperDeck combined with new innovations such as space saving H.265 files, optional internal cache, 3D LUTs and HDR support! With the ability to record up to native 8K in H.265, you get reduced storage costs and amazing image quality. The large touch screen ensures a perfect view of your recording as well as control over all deck settings. You can then add HyperDeck Extreme Control to transform it into a traditional broadcast deck! This means HyperDeck Extreme is the perfect solution for the next generation of broadcast & live production.

Automate Editing Between Tape and HyperDeck

The built in editor allows deck to deck editing. Operating the same way as traditional decks, the controller can operate both the HyperDeck recorder and the legacy broadcast deck all from the same front panel. This allows editing of old videotape simply by selecting the player button and entering in and out points on the tape and then selecting the recorder and pressing edit. The HyperDeck Extreme Control will now cue and play the broadcast deck while recording on the HyperDeck. Often streaming services need 1080p24 masters. That’s easy as it’s possible to add an inline Teranex Express converter to de-interlace, up convert, aspect ratio convert and remove pulldown while editing.

Control Up to 8 Broadcast Decks

The top of the HyperDeck Extreme Control includes a row of 8 buttons for the recorder selection and a row of 8 buttons for the player selection. There’s a built in remote control router that makes multi deck work possible. The connections are all standard RS-422 control so each device can be plugged into one of 8 rear mounted RS-422 sockets. You can even use the 8 ports to control 8 HyperDecks! The RS-422 control has been tested to ensure compatibly with legacy broadcast decks such as the BVH-2000 series 1 inch C format machines, D2, Betacam SP and Digital Betacam broadcast decks.

You get familiar transport controls, such as PLAY, which when pressed during a recording, will cause the recording to stop and then the deck will continue to play from the same point. To start a recording, press both the REC and PLAY button simultaneously. If you hold down the REC button while a HyperDeck is in record it will change cards! When either
REW or F FWD is pressed, the deck will shuttle reverse or forward at the maximum rate. The search direction indicator will also show full speed shuttle. Available when used with HyperDeck, the SKIP REW and SKIP FWD buttons will move
to the previous clip or the next clip in the recording.

The transport controls are a hybrid of controls from HyperDeck as well as traditional decks. You get buttons for rewind, fast forward, stop, play and record. To protect videotape masters, recording requires pressing both REC and PLAY! There’s an eject button for ejecting cassettes, an input button for changing EE/PB modes plus a pre-roll button for cueing the tape.

Full deck status is included and this includes a large easy to read timecode display. This display indicates the timecode of the current selected deck and the timecode source switch will control what’s displayed on the time counter. The horizontal light bar indicator allows the user to see the position of the search dial and provide a visual feedback, which is important when working with remote decks. The servo indicator light will show when the deck is in play or record mode and the servo system is correctly locked. Because remote decks will still display the time counter and transport state, the remote indicator will let you know if the deck is in remote. There’s even external video reference status!

Flexible In and Out Point Entry for Editing

The high quality search dial features both jog and shuttle plus an electronic clutch that stops the knob at the end of the shuttle travel or allows free spinning when in jog. HyperDeck Extreme Control replaces varispeed with a position function that allows rapid movement up and down the recording. The search dial uses twin bearings so you can free spin it for fast jog.

Read up more about Blackmagic Design products at www.blackmagicdesign.com 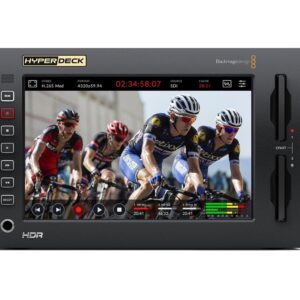 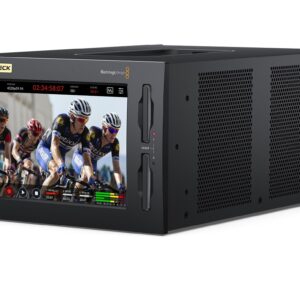 R107,400.00 incl VAT
This advanced 8K model includes all the features of the 4K model, plus adds 8K 4320p60 recording and playback in H.265 and ProRes files. Includes touchscreen, scopes, user cache, and Quad Link 12G SDI. Blackmagic Design Hyperdeck Extreme 8K HDR features the trusted reliability of HyperDeck combined with new innovations such as space saving H.265 files, optional internal cache, 3D LUTs and HDR support! With the ability to record up to native 8K in H.265, you get reduced storage costs and amazing image quality. The large touch screen ensures a perfect view of your recording as well as control over all deck settings. You can then add HyperDeck Extreme Control to transform it into a traditional broadcast deck! This means HyperDeck Extreme is the perfect solution for the next generation of broadcast & live production.
Add to cart
Quick view 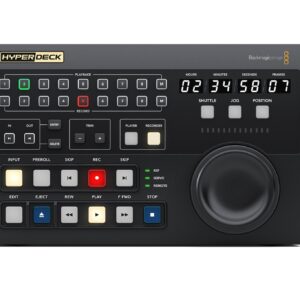 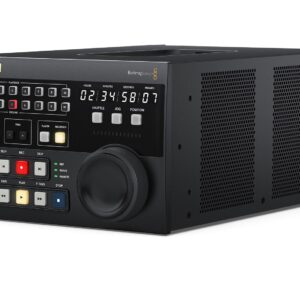 R27,895.00 incl VAT
HyperDeck Extreme Control gives you traditional deck control features with a built in editor for automating the ingest of legacy videotape based programming. Combined with HyperDeck Extreme, you get a professional deck solution that’s exciting and fast to use. There are transport control buttons, timecode, deck status, plus a large search dial with electronic clutch for jog, shuttle and positioning. Controlling up to 8 separate decks is possible using standard RS-422 ensuring compatibility with virtually any type of deck! It’s even possible to edit between different video standards, so you can up convert old 4:3 interlaced SD masters to 1080p HD in 16:9 via a Teranex Express converter.
Add to cart
Quick view 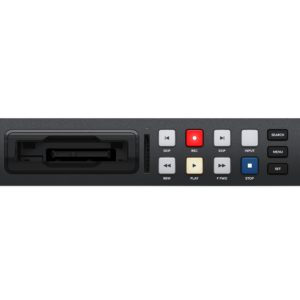 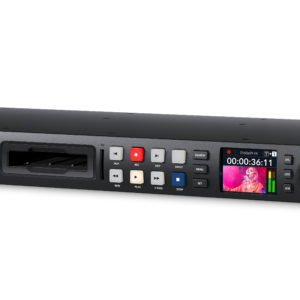 R34,400.00 incl VAT
The new HyperDeck Studio recorders have been totally redesigned with dozens of new features! The Hyperdeck Studio 4K Pro is an extremely powerful Ultra HD model records and plays H.264/5, ProRes and DNx files in all SD, HD and Ultra HD standards up to 2160p60. Records SD and HD in H.264 and Ultra HD in H.265
Add to cart
Quick view 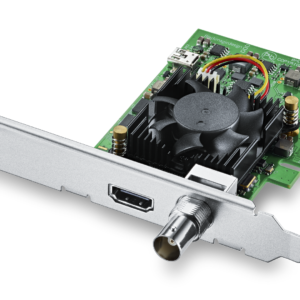 R4,030.00 incl VAT
DeckLink Mini Recorder 4K is a low profile PCI Express capture card, featuring 6G-SDI and the latest HDMI 2.0a connections so you can record all formats up to 2160p30 on your computer! The SDI and HDMI inputs automatically detect and switch between all video formats. You even get high dynamic range recording and metadata over HDMI. The DeckLink Mini Recorder 4K is perfect for integrating into mobile live capture environments, broadcast trucks and more! You can even develop your own custom capture solutions using the Blackmagic Desktop Video SDK for Mac OS, Windows and Linux! Includes two PCI Express shields for both full height and low profile slots.
Add to cart
Quick view 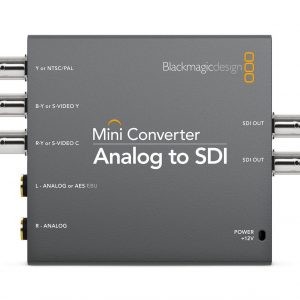 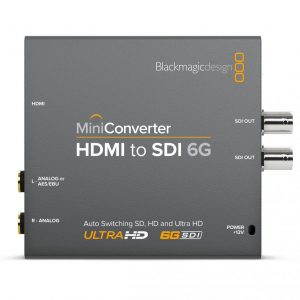 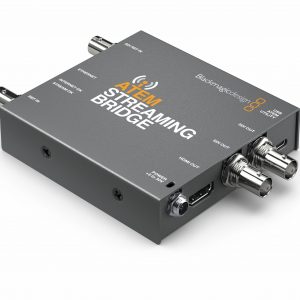 R4,999.00 incl VAT
The ATEM Streaming Bridge is a new video converter that lets you receive a H.264 stream from any ATEM Mini Pro and convert it back to SDI and HDMI video so you can send it to remote locations around your local Ethernet network, or via the internet globally!
Add to cart
Quick view 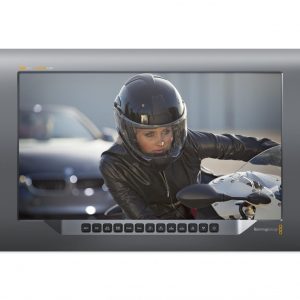 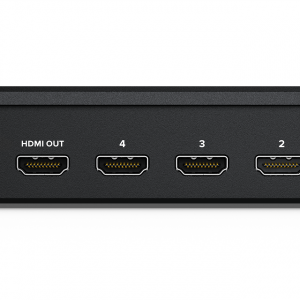 R10,050.00 incl VAT
ATEM Mini Pro includes all the features found in ATEM Mini, plus more! You get recording direct to USB flash disks in H.264 plus direct streaming via the Ethernet to YouTube Live and more. There's also a multiview with 4 cameras, media, preview and program plus status of recording, streaming and audio.
Add to cart
Quick view 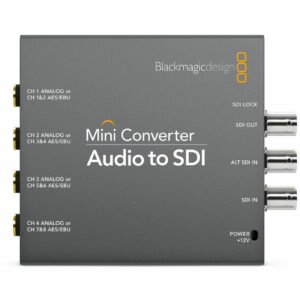 R3,995.00 incl VAT
Embed audio into any SDI source in SD and HD formats up to 1080p60! Audio is input as balanced analog or AES/EBU using ¼ inch connectors from equipment such as mixers and analog decks. Mini Converter Audio to SDI is the ideal SD/HD SDI audio embedder for when you don’t need the cost of the Ultra HD model!
Add to cart
Quick view 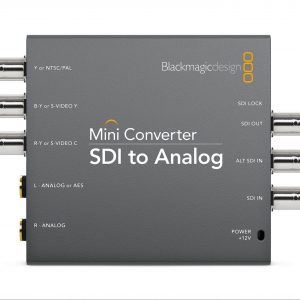 R3,995.00 incl VAT
The perfect way to convert from SD and HD‑SDI to analog component, s‑video or NTSC/PAL composite. Mini Converter SDI to analog supports all SD and HD input formats up to 1080p30 and includes a down converter for when you need to convert from HD to standard definition analog formats such as s‑video and composite. Audio can be de‑embedded to balanced analog or AES/EBU. Mini Converter SDI to Analog is ideal for converting to older analog equipment when you don’t need the extra cost of the 6G‑SDI 4K model.
Add to cart
Quick view
Shopping cart
close